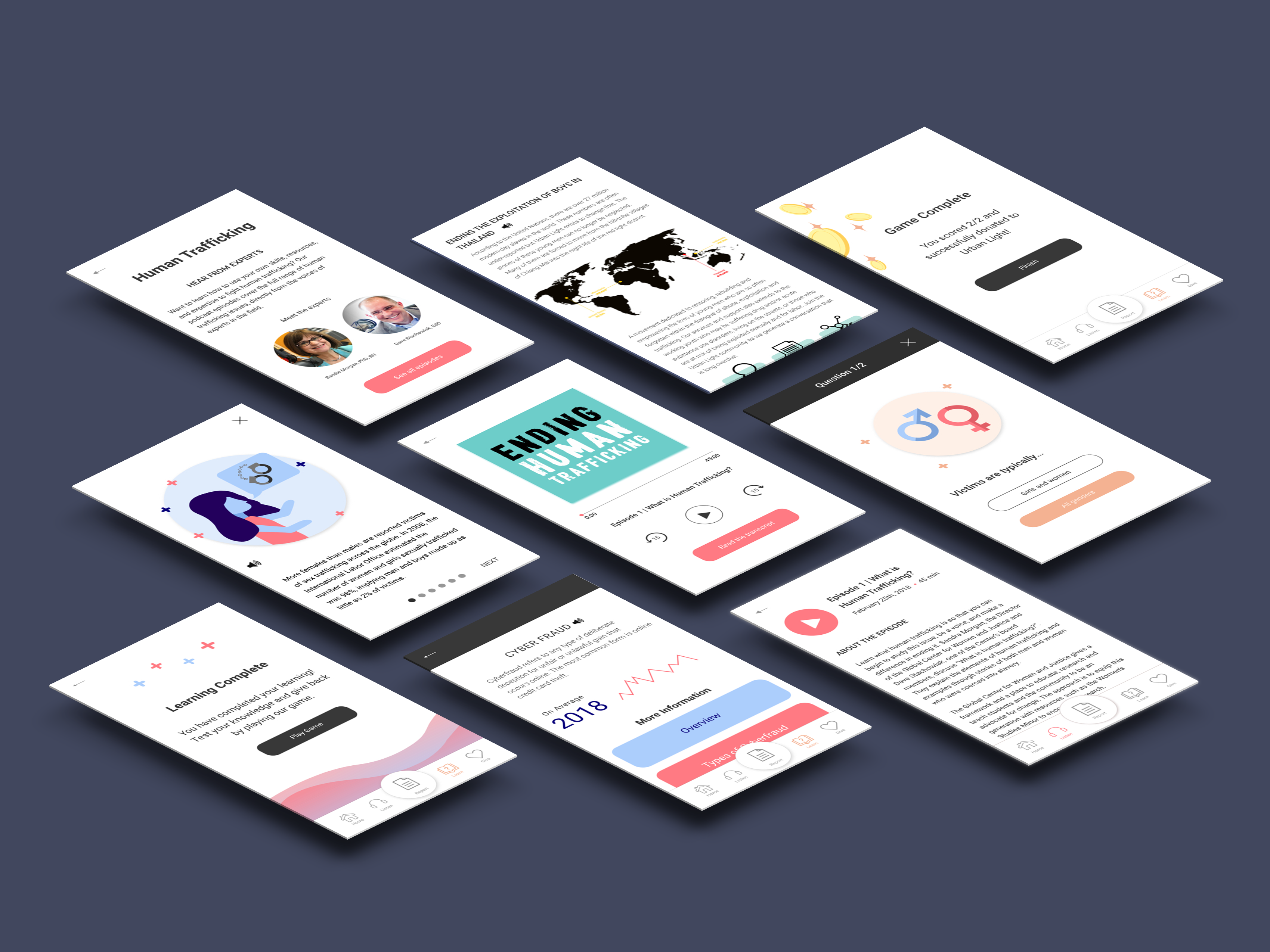 The following work was created in collaboration between Mary Nagakawa, Adrienne Wong, and I. The objective of our project was to design an accessible interface for a mobile app aimed at preventing human trafficking and cyber fraud, as well as educating the general public and providing support to those affected by these issues.

Our project is a UX/UI mobile development with the purpose of helping those affected by human trafficking and cyber fraud. Our intent was to create a multi-purpose mobile app that allows users to:​

The app is a continuation of a past team’s project where one of their goals was to design for non-native English speakers and the illiterate. We wanted to honor the objectives of the previous team by designing the app for these demographics, but were also interested in designing for those with disabilities in order to reach as many users as possible.

Most of the mobile applications currently available for fighting Human Trafficking & Cyber Fraud are not user friendly.

Typically, these apps are catered towards one specific audience or have very few functions to motivate users to continually return to the app. The informative apps usually have a one time use since users will take in the information once and never go back to the app again. Apps containing a reporting function typically lack the informative side and only gives users the option to call for help or send photos once the crime has been committed. All of these apps also lack accessibility for those who may be illiterate or speak another language. Moreover, most Human Trafficking and Cyber Fraud apps currently in the market contain dark, serious graphics, making the app unapproachable for many to use.

Human trafficking is most common in California, Texas, and Florida. California received the highest number of cases in part due to their large population. Immigration population is said to be higher in those states, making the overall percentage of illiteracy higher than other states. Therefore, the need to keep language barriers in mind when designing the app is crucial.
‍
The top three prominent languages human trafficking victims speak are English, Spanish, and Chinese (Mandarin). Human trafficking occurs most prominently in the Central Coast of California, exactly halfway between San Francisco and Los Angeles. From 2010 to 2018 alone, over 700 victims have been identified and rescued in the Central Coast.
‍
The common misconception is how major cities such as SF and LA are targets for human traffickers because a lot of activity happens since they are major cities. However, the Central Coast is known to be the corridor for human trafficking because of its convenient location and idleness. Residents of the Central Coast need to be educated about their surroundings and need to have access to resources that can help them feel safe in the community they live in.

Occupation: A social activist working in publicity in Los Angeles, CA.​
‍
‍Personality Traits: Outspoken, Brave, Intuitive​
‍
Rebecca recently graduated from University of Southern California with a degree in Public Policy. She currently works in publicity with a media company in Los Angeles, California. In her free time, Rebecca is involved in activisms, and takes part in social injustice issues going around in the city. Because of her career, she often works long hours and doesn’t go home until late at night. As she commutes to work through public transportation, there have been several incidences where she’s felt unsafe, or witnessed others being followed and harassed on the streets. Rebecca is very much aware of the human trafficking issues going on in her area. She wants to actively feel safe on her commute home from work, and wants to find a way she can quickly contact authorities in case she witnesses suspicious activity.​

‍Goals: To feel safe in her city and to have easy communication to authorities.
‍
​Frustrations: Won’t be able to identify when to report, can’t stay overtime for work, won’t get projects done.

‍"There are a lot of sketchy people in LA, and with all the human trafficking incidences going on, I want to not only feel safe, but also find a way to report to the authorities in case I run into an incident walking home."​

Occupation: Accountant in Houston, Texas​
‍
Personality Traits: Insightful, Cordial, Easygoing
‍
Thomas is an accountant in Houston, Texas. He lives there with his wife and two children who are 12 and 8 years old. Thomas works hard to support his loved ones, and is a huge family man. Lately, he’s been hearing a lot about human trafficking stories in his area on the news and is growing concerned about his 12 year old son Caleb. For his birthday this year, Caleb was gifted his very first phone and has been spending a lot of time on it. Thomas recently caught Caleb using the phone during unsupervised time, and started noticing changes in Caleb’s behavior. He’s worried that Caleb is acting distant and secretive now because of his activity online. Thomas wants to learn more about human trafficking, and whether or not his son may be a potential victim. Additionally, Thomas works full time from 9 A.M. - 5 P.M., so he has both of his children walk home from school everyday since they live only a 10 minute walk away. He begins to wonder if this is safe for his children.

‍Goals: Learn about the signs of HT and take action from it, learn about preventative tips, find resources that can help him and his son through this situation.
‍
​Frustrations: Has very little knowledge this issue, doesn’t know how to help son, wants to have access to as many resources as he can.​

“I just want to keep my family safe. The last thing I want to see is my son on the news.”

Occupation: Volunteer at Human Activist Research and Education Center in New York, New York​
‍
‍Personality Traits: Caring, Empathetic, Strong​
‍
Gina has been a volunteer at her local human activist research and education center in New York for over 15 years. Gina’s parents immigrated to America when she was young, and they lived in a high risk neighborhood. As a child, Gina encountered problems with her education and is illiterate. When she was a teenager, she became a victim of human trafficking and vowed to devote the rest of her life to the prevention and elimination of it after she was rescued. It took Gina a couple years to recover from the trauma she suffered, but she got back on her feet and regained her life. Now Gina shares her story to raise awareness of the issue and empower victims, and spends her free time working at the center. Recently, a friend told her about a great informative app about fighting human trafficking. She’s interested in checking it out, but can’t read most of the app’s content.​

"I’ve been through a lot, but that doesn’t keep me from living my life. Although I’m surrounded by people who can offer me help, sometimes I wish I could navigate my phone myself."

We were given a list of potential contacts and mentors at the beginning of the quarter. Some of these contacts included professionals who work at the California Cybersecurity Institute, Santa Barbara DA office, FBI, and here at Cal Poly. We were hoping to meet with them to learn more about human trafficking and cyber fraud as well as discussing the concept of our mobile app. We were going to talk about the app interface, and what they thought was the best visual language for our target audiences. Some other contacts and organizations we could have worked with were the DRC, SAFER, and the Sociology and Psychology department.

Although we were provided with a list of contacts and reached out to a number of them early in the quarter, many contacts were unresponsive or hard to coordinate meetings with due to their busy schedules. However, we did meet with Danielle Borrelli from the California Cybersecurity Institute once and got lots of helpful feedback and input from her. We also attempted to meet with Debra Deem, who works with the FBI as a victims’ specialist; however, she had an emergency and we had to reschedule our meeting. We have not heard back from her yet.

These are the app's main functions that we decided on. There is someone on call 24/7; when you feel unsafe, or victimized, chat with someone who can give you the support you need.

Play our trivia game to stay informed and learn more about
human trafficking and cyber fraud.

Notify police with your GPS location for immediate action.

Hear stories and educational informations.
‍
These are from the community and experts through podcasts.

Take in to give back.
‍
By playing trivia and learning about these issues, you will help
donate to organizations for the cause.

Analyzing how our app's features compare to other apps that have already been developed.

From the apps: Headspace, TimePage, Ulzi, and Marriage Health App 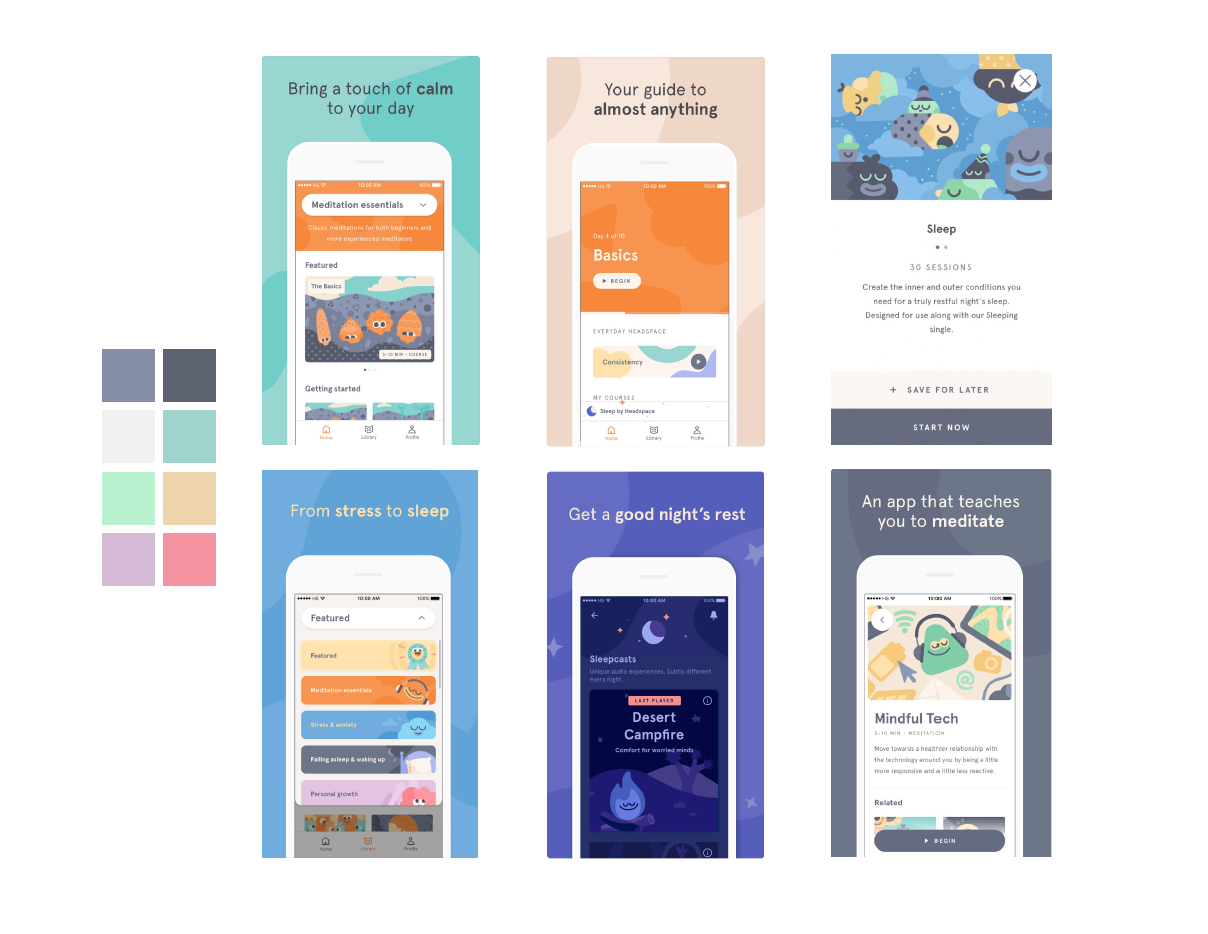 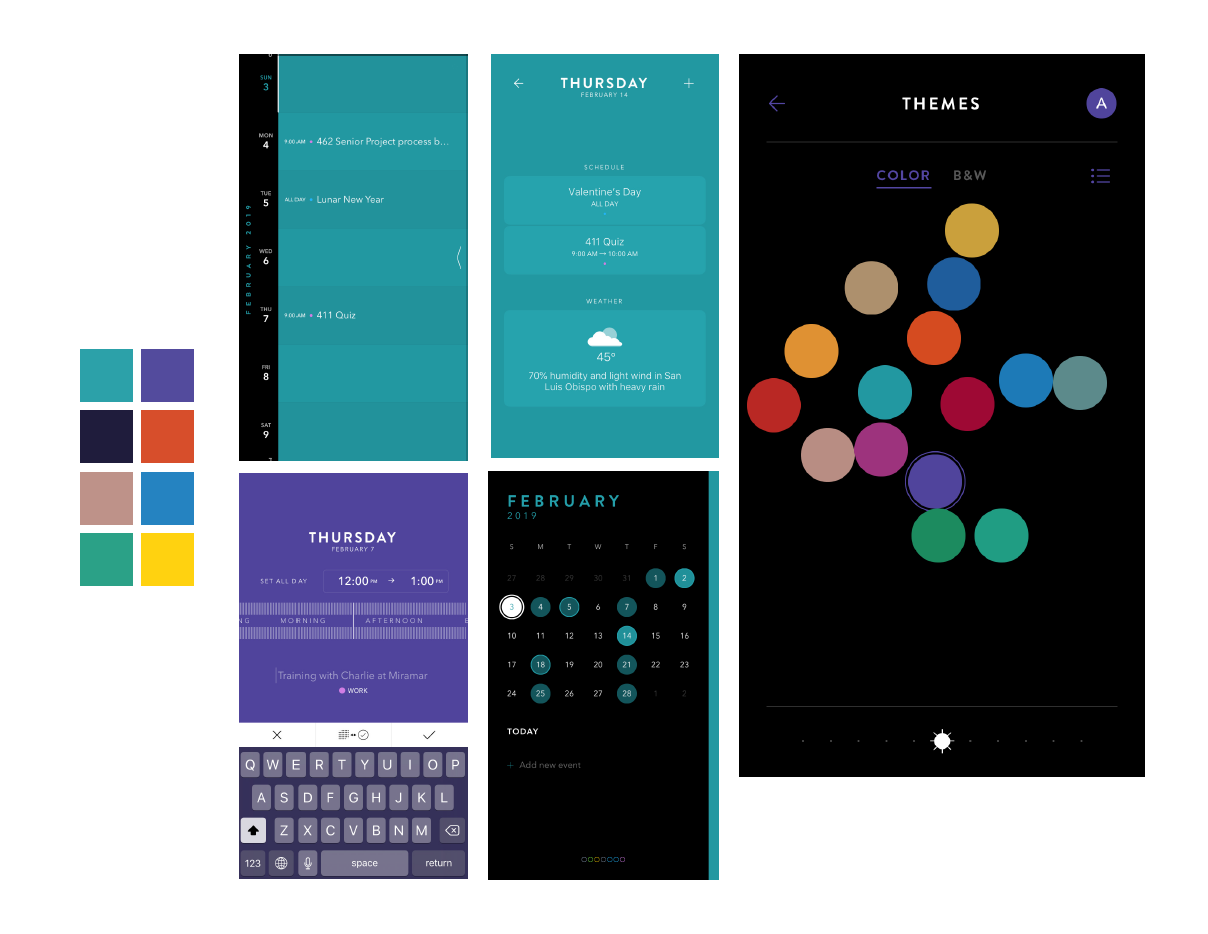 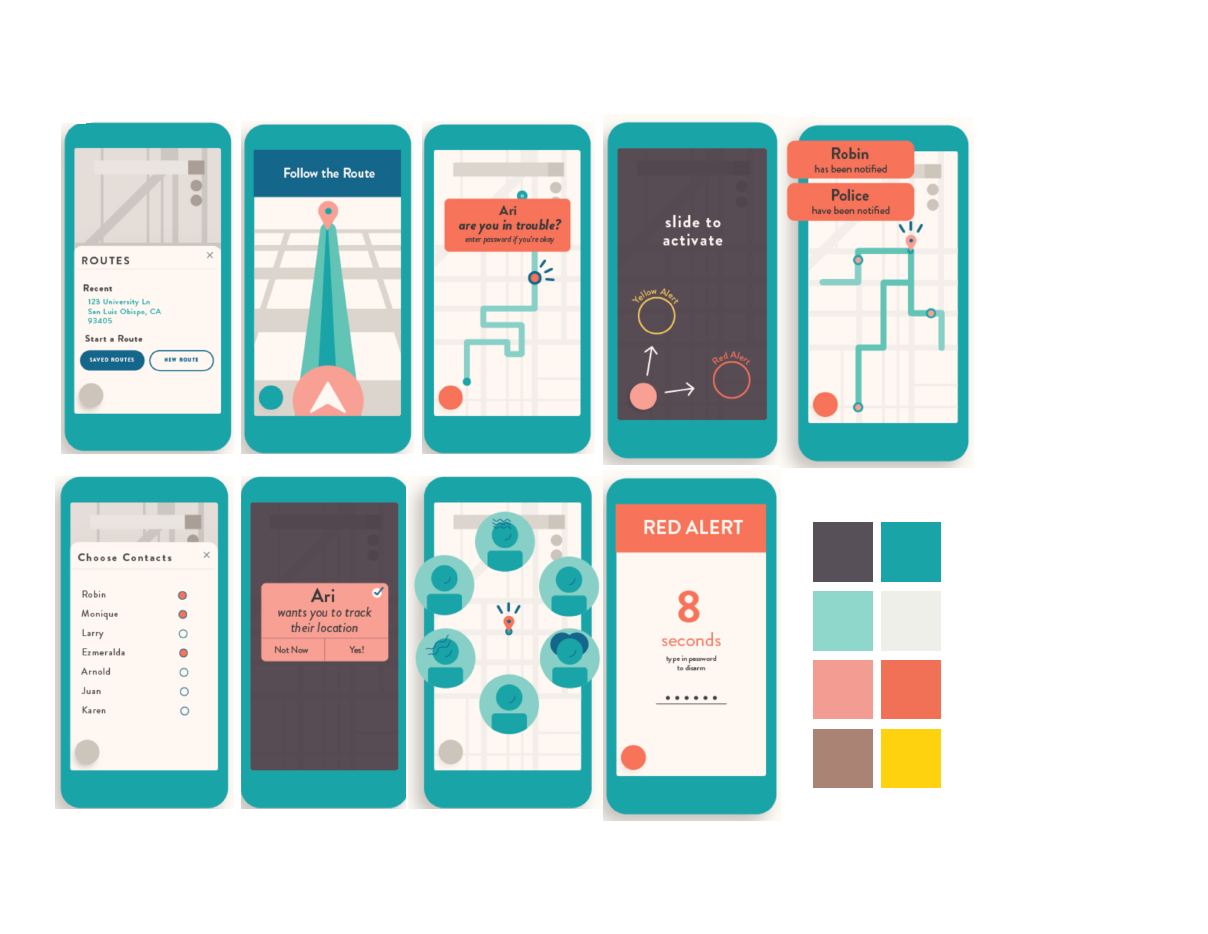 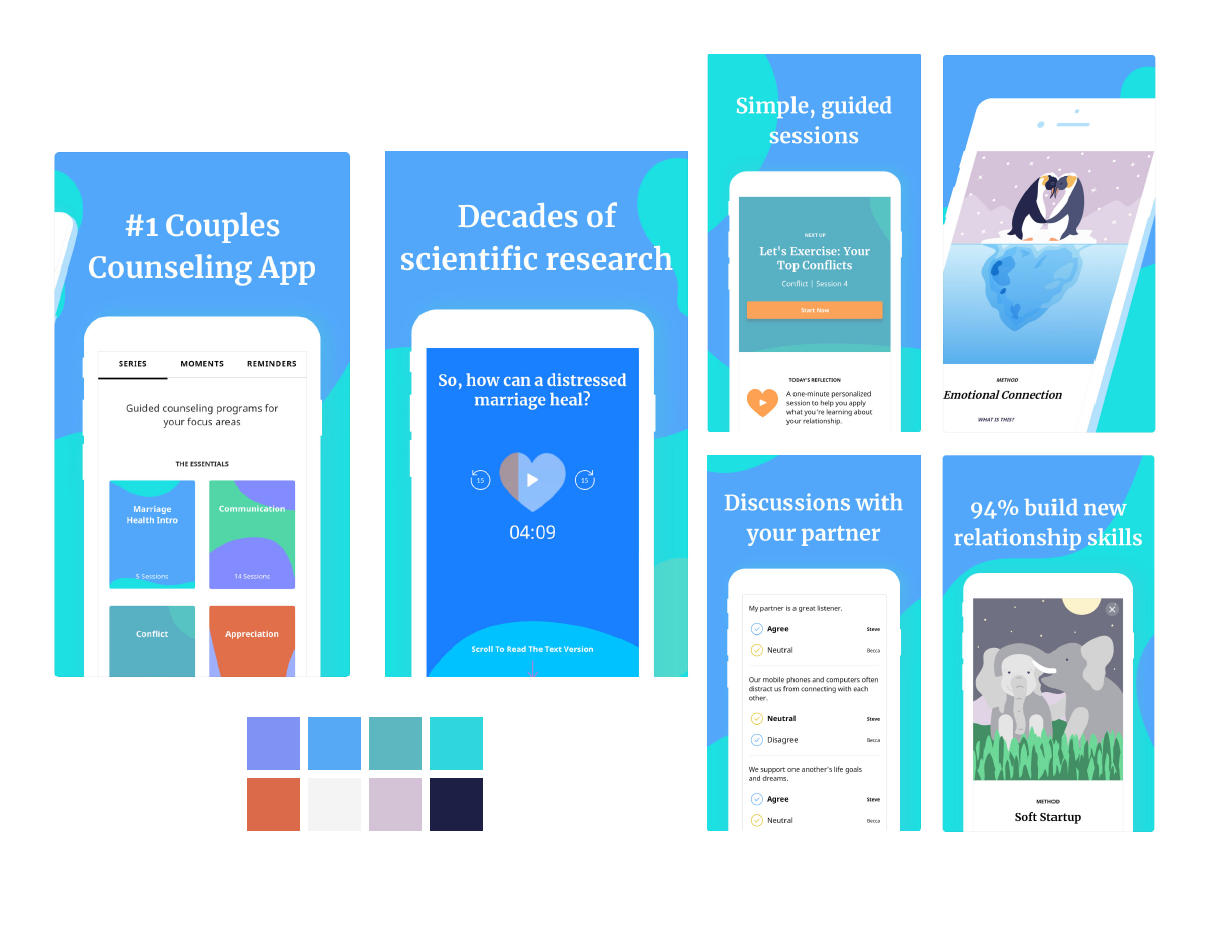 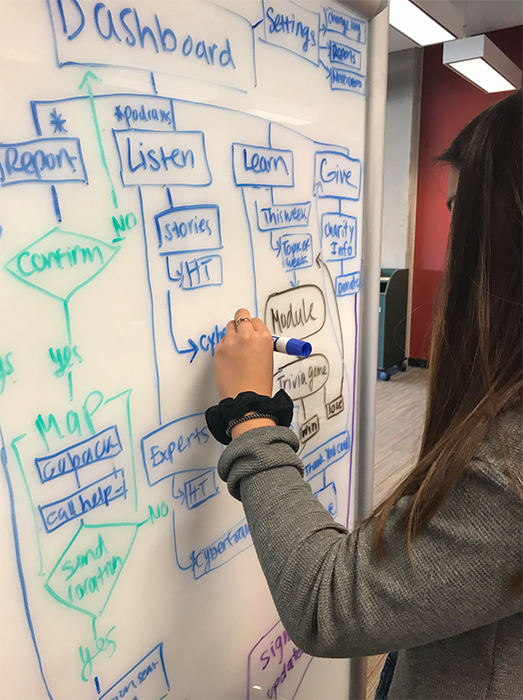 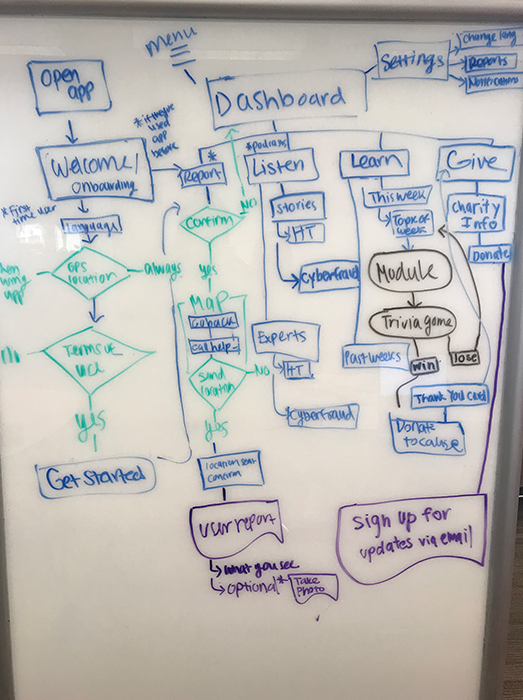 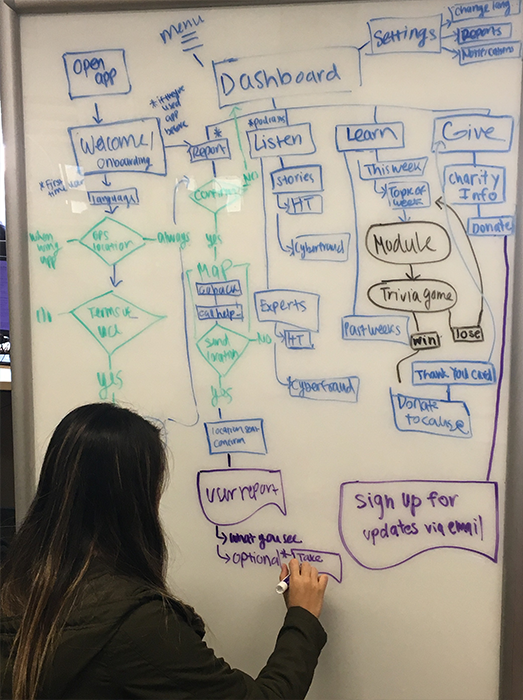 The mobile app's information architecture was developed in Axure. 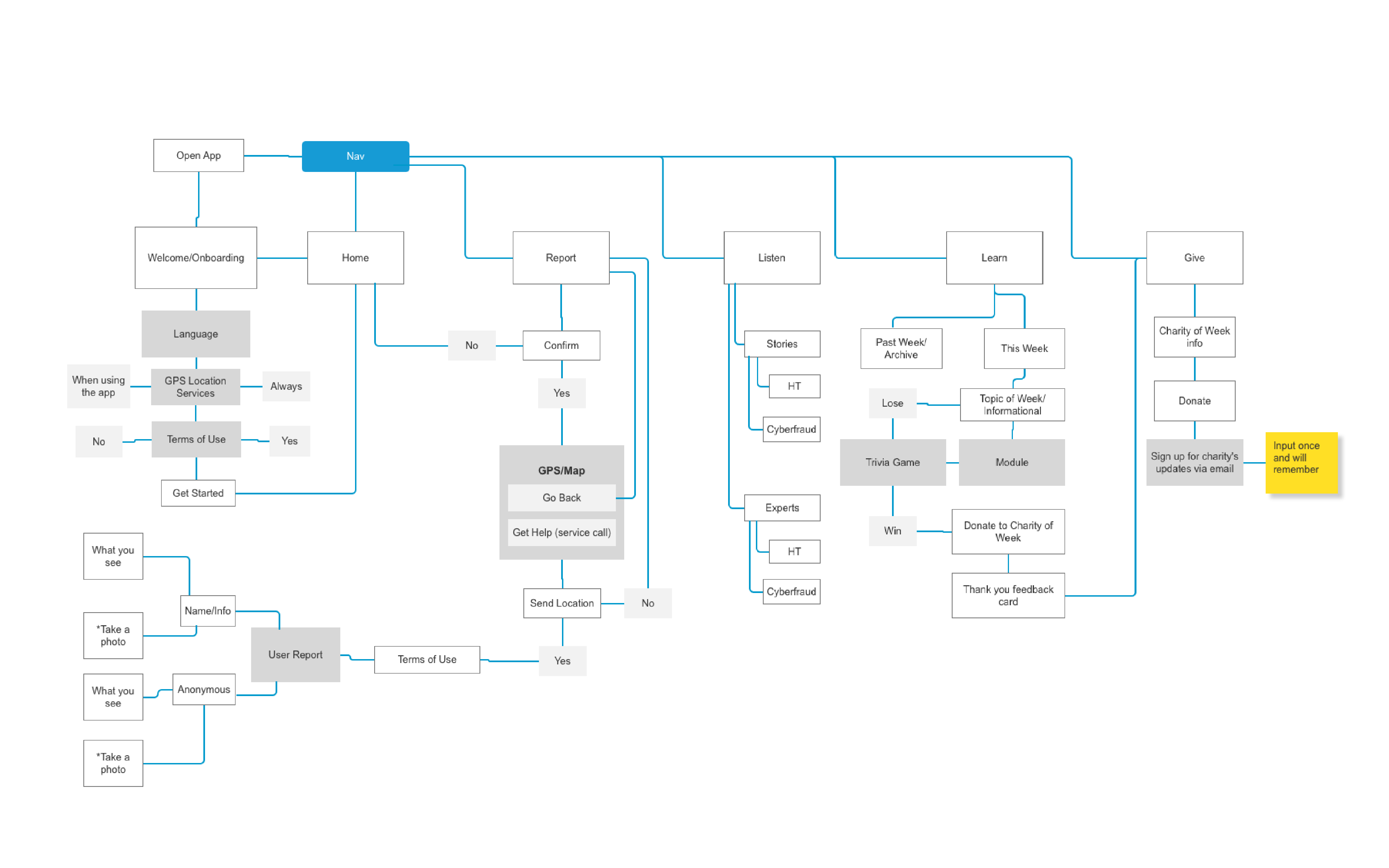 These were our sketches for our interaction frameworks. We pulled inspiration from user interfaces that people already had a mental model for. This would include Apple's products and their user interface. 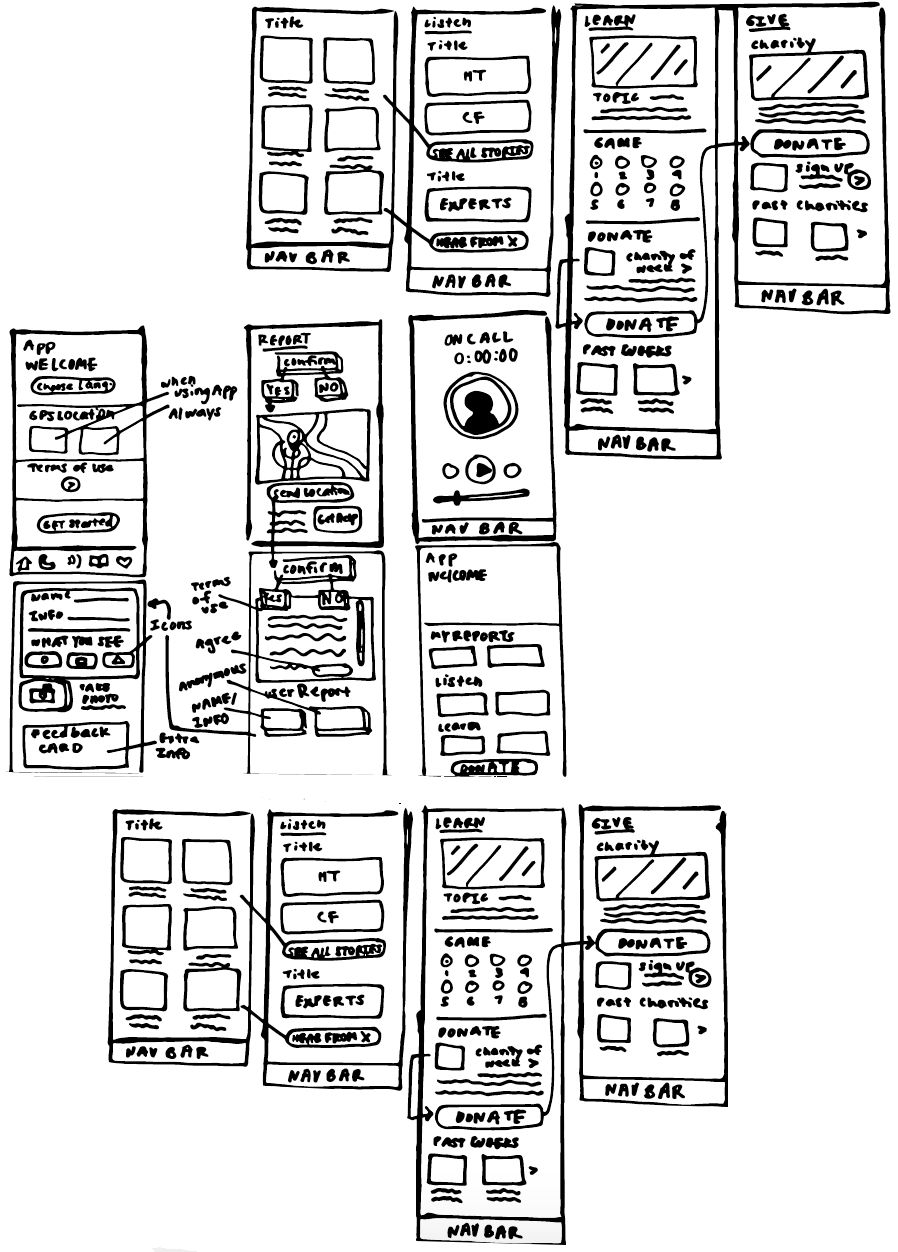 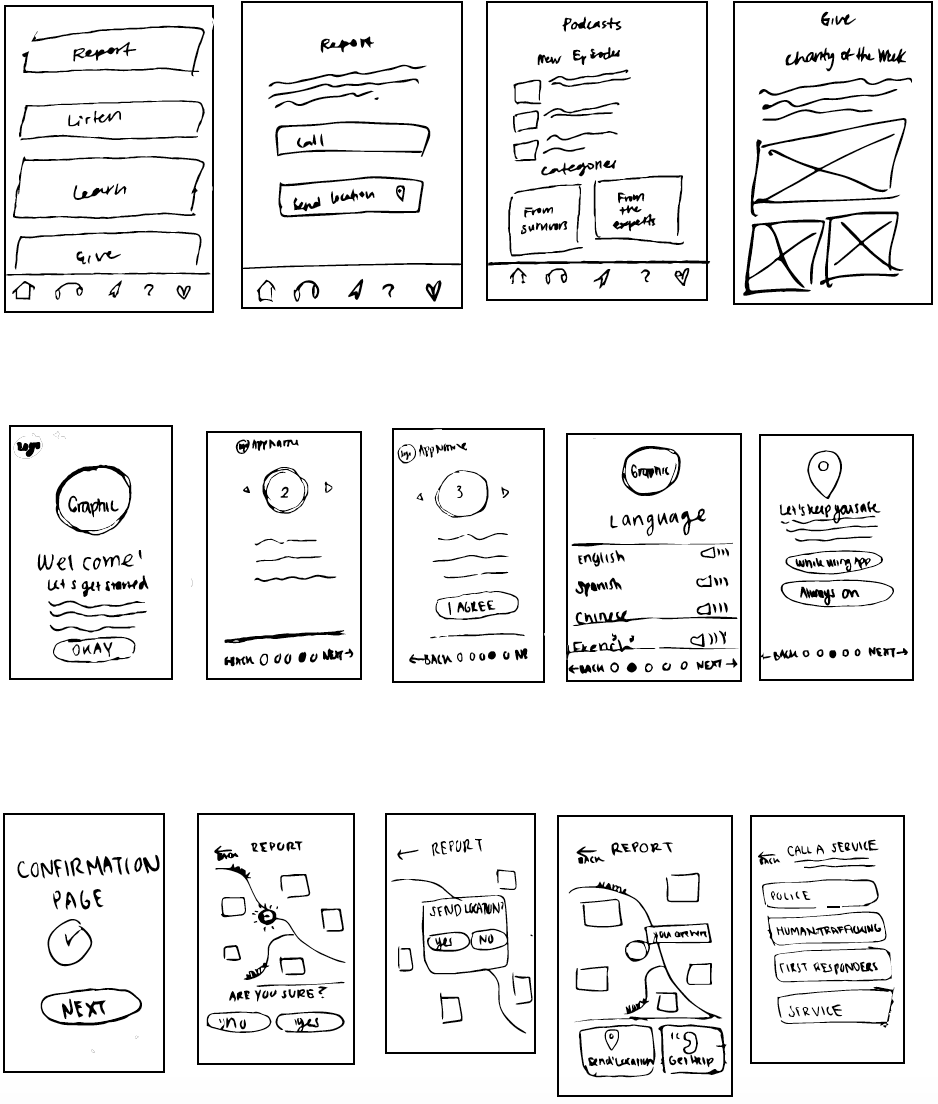 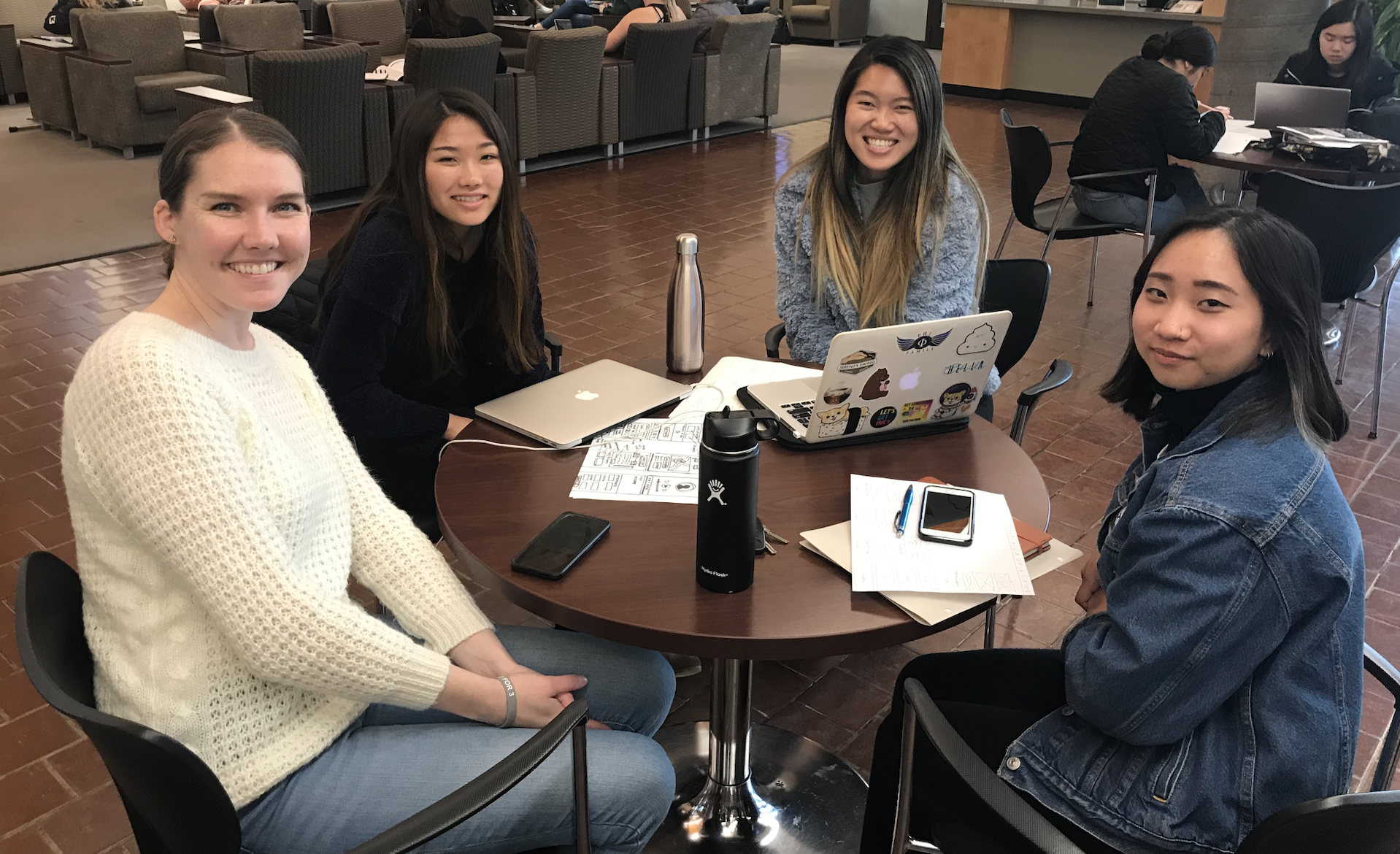 Meeting with a member of the CCI

Here is a picture of my group meeting with Danielle Borrelli. We are showing her our interaction framework and seeing if she has any suggestions for fixing the user flow of the features. 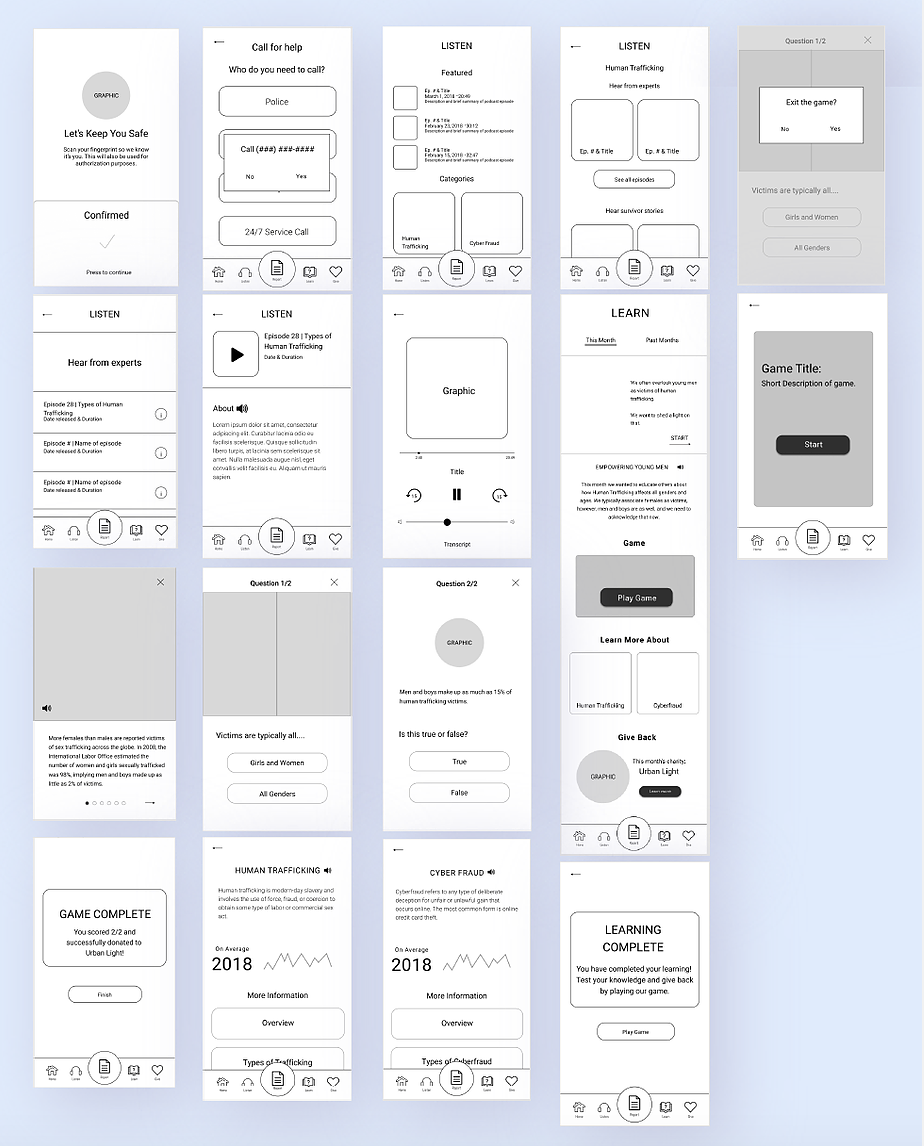 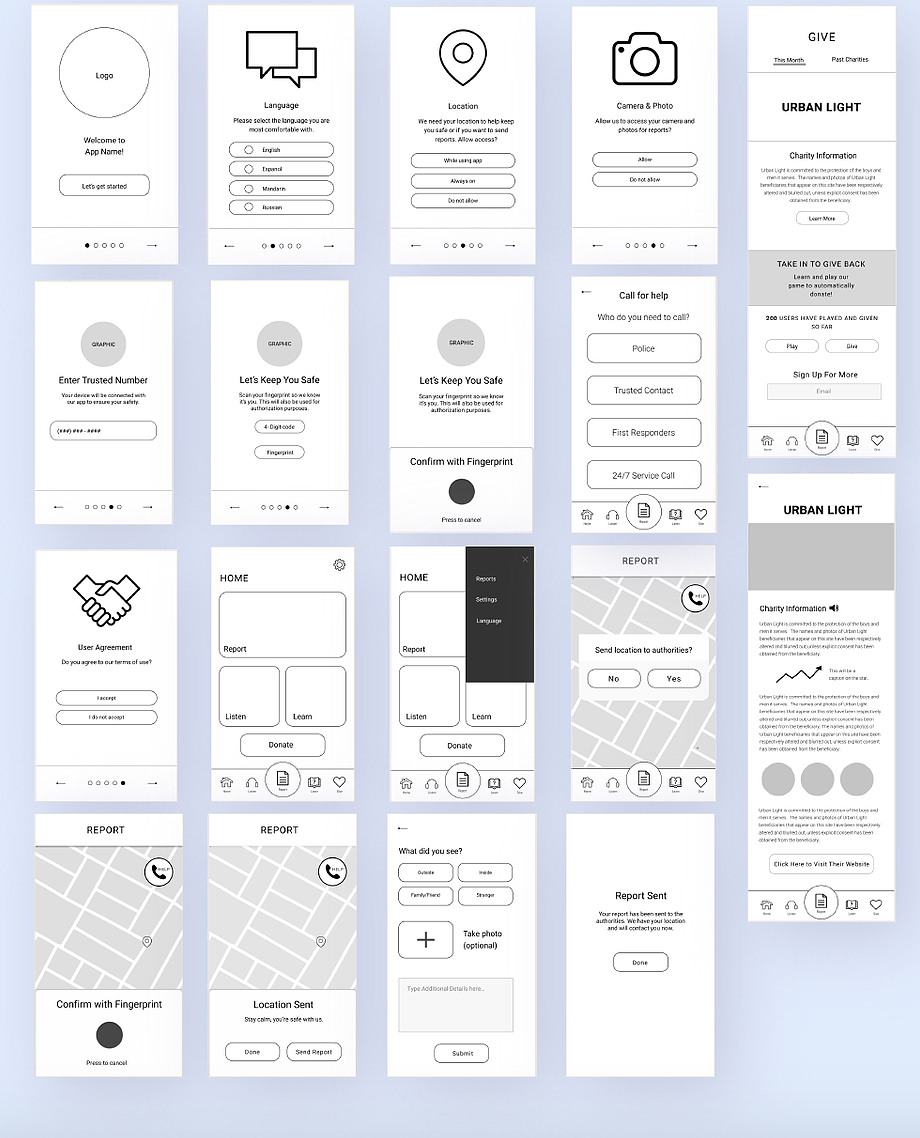 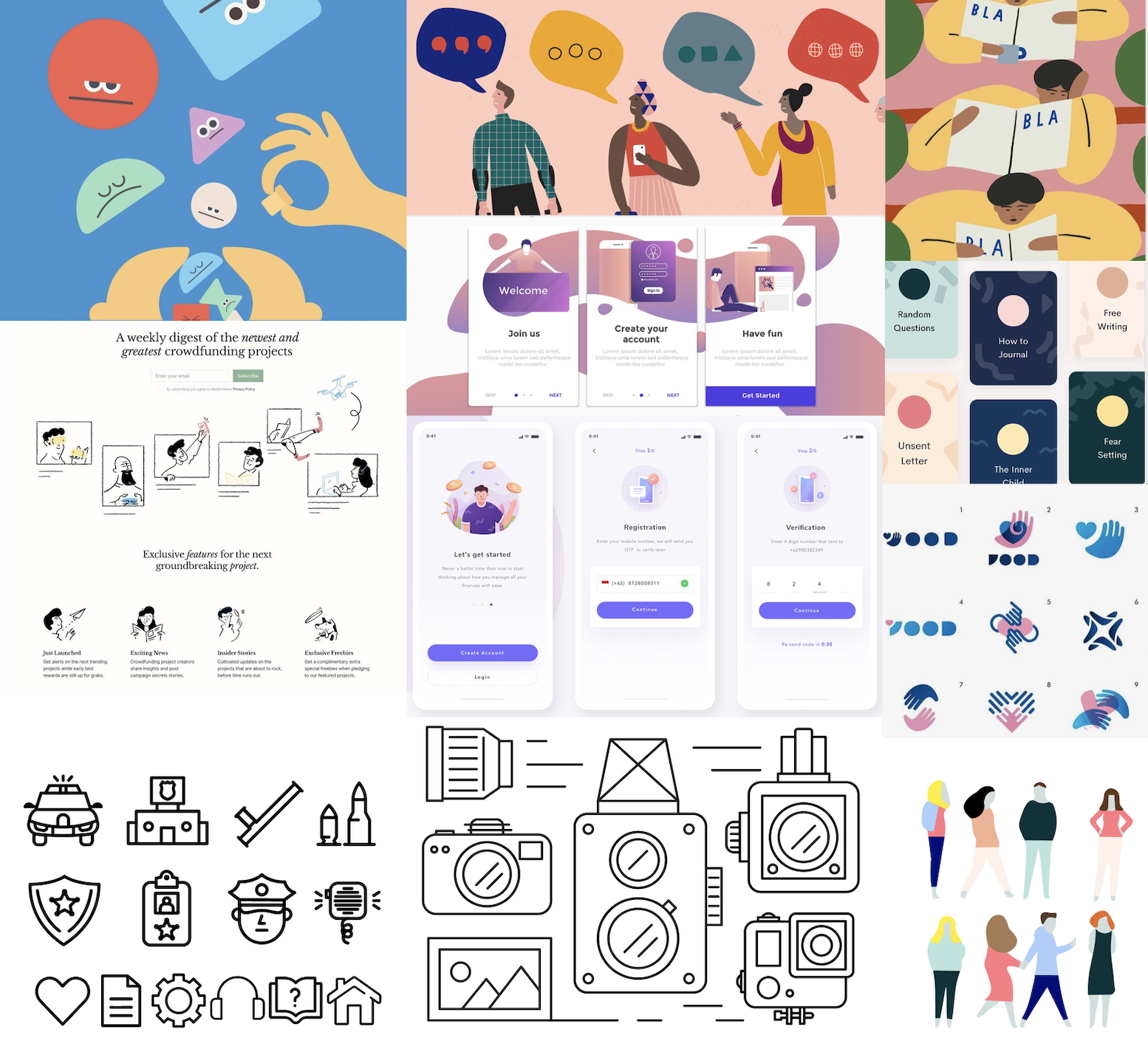 The purpose of the usability analysis tests are to see how effectively the user is able to navigate through the interface and complete the given tasks.

As you can see, all of the participants were able to complete all 6 tasks. This resulted in minor adjustments but not too many changes in our main features or user flow. 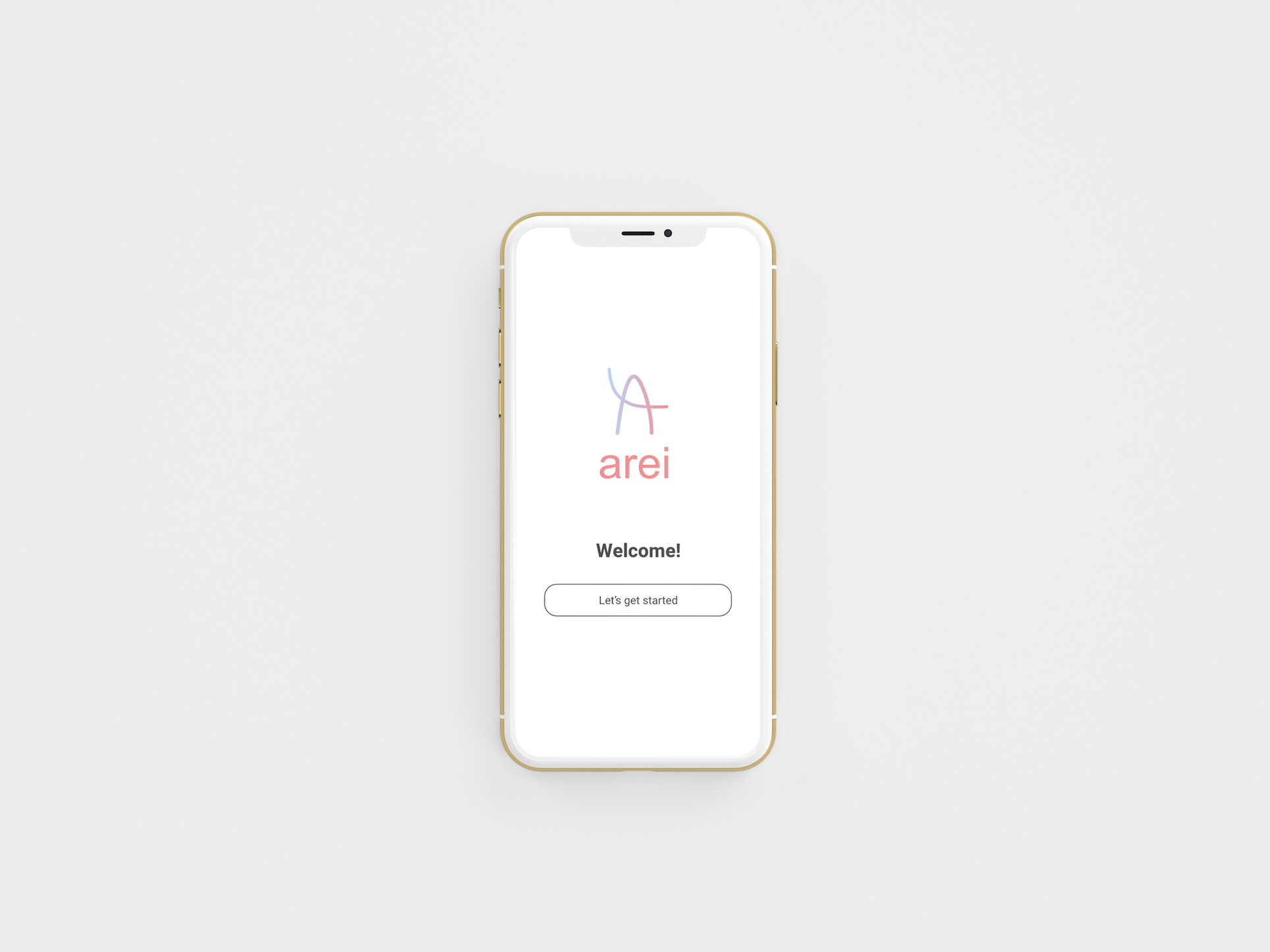 Click on the link below to see the final prototype.

Final Prototype
Back to top